Notice: wpdb::prepare was called incorrectly. The query does not contain the correct number of placeholders (2) for the number of arguments passed (3). Please see Debugging in WordPress for more information. (This message was added in version 4.8.3.) in C:\Inetpub\vhosts\amd.gov.af\httpdocs\wp-includes\functions.php on line 5315
 Frost – Afghanistan Meteorological Department

Frost is the coating or deposit of ice that may form in humid air in cold conditions, usually overnight. In temperate climates it most commonly appears as fragile white crystals or frozen dew drops near the ground, but in cold climates it occurs in a greater variety of forms. Frost is composed of delicate branched patterns of ice crystals formed as the result of fractal process development.

Frost is known to damage crops or reduce future crop yields, therefore farmers in those regions where frost is a problem often invest substantial means to prevent its formation. 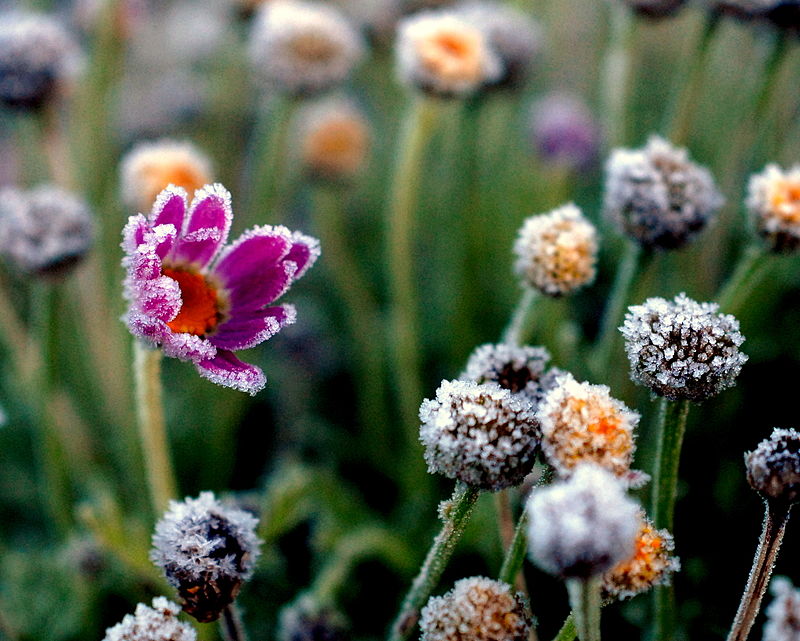 A flower with advection frost on the tips of its petals.

Frost forms when the temperature of a solid surface in the open cools to below the freezing point of water and for the most clearly crystalline forms of frost in particular, below the frost point in still air in most temperate countries such temperatures usually are the result of heat loss by radiation at night, so those types of frost sometimes are called radiation frost.
Types of frost include crystalline hoar frost from deposition of water vapor from air of low humidity, white frost in humid conditions, window frost on glass surfaces, advection frost from cold wind over cold surfaces, black frost without visible ice at low temperatures and very low humidity, and rime under super cooled wet conditions.

What to do When the Frost Hits, Before and After?

First: Don’t panic. If you have plants already hurt by frost, don’t rush out and start whacking off the damaged bits. Leave them alone until you see new growth. Some things will be OK under it all, and the dead tissue you leave on the plant can insulate the growing points against further damage. The brown stuff looks ugly but it won’t harm and it might help.
Second: Don’t despair. If there was a freeze and you didn’t get your plants covered and there’s another night of frost on the horizon, cover them. Preventing more damage will give them a better chance to recover.
Third: Don’t let the perfect be the enemy of the good. If you can’t quite do it right, protect your plants as well as you can.
Fourth: Get out there early the morning after and uncover those plants, especially if you’ve used plastic sheeting over them. That stuff works as a solar oven in the daytime, and your poor plants can get cooked.

Plants typically freeze when the night is clear and the air is still. A decent breeze will decrease the peril, cloud cover will moderate the temperatures. Your garden’s in more danger if it’s at the bottom of a hill, because cold air drops and warm air rises.

If you have tender plants tropicals and subtropicals, generally in pots, bring them under the eaves, into the garage, or onto the porch. Anything overhanging them will help. Also, the thermal mass of a building, the heat it’s absorbed from the sun all day, will moderate temperatures near it. If you can’t move it, cover it.

Plastic sheeting is a classic here. To best protect the plants, build a framework to hold the sheet. This can be as simple as three garden stakes around the plant, or a tipi of poles with a garbage bag pulled over it. The idea is not to let the cover touch the plant, because where it touches will be damaged.

If you can’t avoid that, though, just throw the sheet over. Better to lose a few leaves than the whole plant.

Experts advise watering plants before a frost, because frostbite is mostly dehydration. Maybe, but there’s one big exception: cacti and succulents.