Notice: wpdb::prepare was called incorrectly. The query does not contain the correct number of placeholders (2) for the number of arguments passed (3). Please see Debugging in WordPress for more information. (This message was added in version 4.8.3.) in C:\Inetpub\vhosts\amd.gov.af\httpdocs\wp-includes\functions.php on line 5313
 Avalanches – Afghanistan Meteorological Department

Avalanches are masses of snow, ice, and rocks that fall rapidly down a mountainside. An avalanche is a rapid flow of snow down a hill or mountainside. Although avalanches can occur on any slope given the right conditions, certain times of the year and certain locations are naturally more dangerous than others. Wintertime, particularly from December to April, is when most avalanches tend to happen. However, avalanche fatalities have been recorded for every month of the year.

Anatomy of an avalanche

All that is necessary for an avalanche is a mass of snow and a slope for it to slide down. For example, have you ever noticed the layer of snow on a car windshield after a snowfall? While the temperature remains low, the snow sticks to the surface and does not slide off. After the temperature increases, however, the snow will sluff, or slide, down the front of the windshield, often in small slabs. This is an avalanche on a miniature scale. An avalanche has three main parts.

The avalanche track: is the path or channel that an avalanche follows as it goes downhill. Large vertical swaths of trees missing from a slope or chute-like clearings are often signs that large avalanches run frequently there, creating their own tracks. There may also be a large pile-up of snow and debris at the bottom of the slope, indicating that avalanches have run. 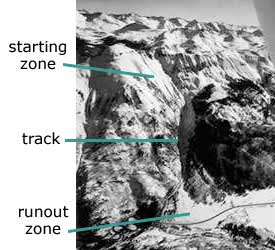 Heavy snowfall and a large number of avalanche were reported in different parts of Afghanistan between 4-7 February . Around 22 out of 34 provinces reported to have been affected. Provinces with casualties and significant damage to homes and livelihoods included Badakhshan, Balkh,Faryab, Samangan, Saripul, Herat, Badghis, Nangarhar, Paktia, Khost, Helmand, Kandahar, Bamiyan, Daykundi, Parwan and Kapisa. In one incident of avalanche in Afsay Village, Barg-e-Matal District (Nuristan Province) claimed at least 57 lives with at least 33 injure.

It is estimated that up to three meters of snow have fallen in different parts of Afghanistan and 17 avalanches were reported within a span of three nights. Initial assessments indicate that limited food supplies in local markets have caused an inflation in prices. Worse yet, the continued wind storms and frozen ground have made it a challenge for affected communities to erect tents and build temporary shelters. 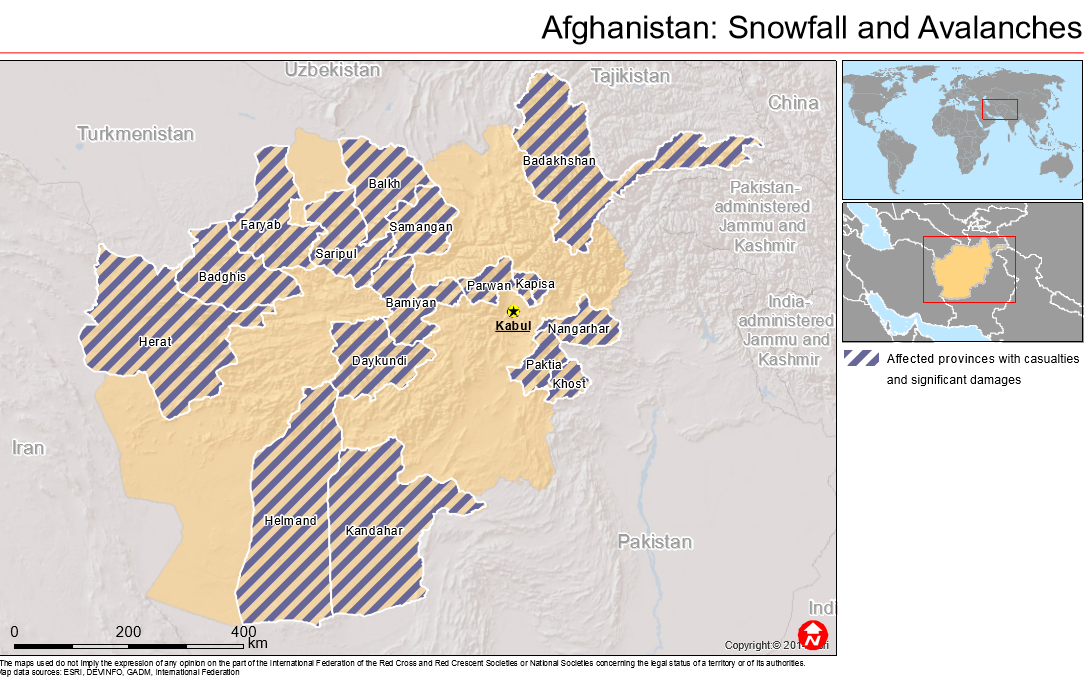